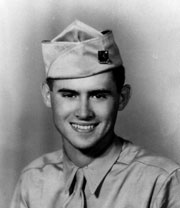 Sam Stanovich loved baseball. One of his favorite players was Joe DiMaggio. But DiMaggio was never Sam’s hero.

“My heroes are all the kids who died in the wars,” he said.

Sam and all four of his brothers served in war zones. Fortunately, none of them were heroes as Sam defines the word.

Actually, he did a quite a bit more than he had to do. He volunteered for a mission that earned him a Bronze Star and a Russian medal, and got his name in a couple of books about World War II.

Sam was drafted in 1942, two years after graduating from the new Farrell High School. He went to basic training and radio school at Fort Hood, Texas. Then he took some tests for the Army Specialized Training Program, which sent selected soldiers to study at universities, supposedly for 18 months. They were to become officers designated to help restore civilian governments in Europe after the war.

Unfortunately, the program was terminated after about six months when the army started preparing for the invasion of Europe.

“They sent us to beef up the divisions that were in the process of going overseas,” Sam said.

Sam’s unit, the Reconnaissance Troop of the 104th Infantry Division, landed in Cherbourg, France, on September 7, 1944, exactly three months after the Normandy invasion. The Allies needed the port of Antwerp to transport supplies from England to a big supply depot in Belgium. The 104th Infantry Division was joined with the First Canadian Army to capture it.

That supply depot was a principal German objective during the last great German offensive of the war, the Battle of the Bulge, in December, 1944.

“We were just north of the Battle of the Bulge. The Germans threw everything they had into that. When they made their first attack, some of their paratroopers landed around us.”

The combined Allied armies, including the 104th Infantry Division, pushed the Germans back into Germany. There Sam personally witnessed the horrors of the Nazi regime. In early April, Sam’s unit arrived in Nordhausen, an auxiliary facility of the Buchenwald Concentration Camp.

“Out of the 6,000 prisoners left there, 5,000 were dead. Our commander, General Allen, made us go in. Underneath the stairways bodies were stacked like cordwood. In the double-decker bunks there were dead people lying right beside the living. Later people started saying the Holocaust never happened. In another 20 years, all the guys who witnessed it will be gone, and they’ll be another drive to push this lie that it never happened.”

By the end of April, the Allied armies were nearing Berlin from the West, while the Russians were reaching the Elbe River from the East. The mission to accomplish the first contact between the two armies is described in , Timberwolf Tracks, the History of the 104th Infantry Division: 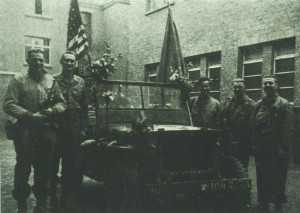 The first Americans to make contact with the Russians in April, 1945. Sam is third from the left.

On the evening of April 23 Lieutenant Harlan W. Shank, Sergeant Jack Adler, Corporal Bob Gilfillan, and Corporal Sam Stanovich of the 104th Reconnaissance Troop, plus a liberated Russian officer, crossed the Mulde, headed for Torgau on the Elbe.

Sam had volunteered for the mission.

“Two of my best buddies were going, and they needed another guy with radio experience in case we made a contact and we had to do some radio work. I had been to radio school, so I volunteered.”

It was a mission filled with uncertainty. All alone, without any support, the five had to cross territory occupied by many German troops, about 30 miles from Berlin. Although they were surrounded by the enemy, they took the bold step of mounting an American flag on their jeep.

“That saved the day. The Germans were afraid to death of being captured by the Russians. The Germans had killed a lot of civilians in Russia, so they knew they would get more humane treatment with the Americans. Our army is probably the most humane army in the history of the world.”

Along the way, the four Americans encountered a German colonel who was in command of 1,200 troops.

“The four of us surrounded them and they surrendered,” Sam jokes. “Actually, the colonel was ready to surrender, but said he couldn’t without orders from higher command. He said to stop again on our way back through.”

Corporal Bob Gilfillan is quoted in Timberwolf Tracks about meeting up with the Russians: “Greeting the general was quite an honor, for I got the feeling that I myself was tying a bond that signified the end.”

On their way back to the American front, the patrol met up again with the 1,200 German troops.

“The Colonel wasn’t there,” Sam said, “but there was another officer. They had their guns all piled up, and our lieutenant told them exactly where to go to surrender.”

Unfortunately, the war with Japan continued. Many American soldiers, including Sam, were sent to California to train for an invasion of Japan. Many were expecting a 90 percent casualty rate in that attack, but the atomic bombs on Hiroshima and Nagasaki brought about Japan’s surrender before their training even began.

Maybe the army didn’t make a soldier out of Sam, but he came out of it a good man. He delivered mail in Farrell 30 years. His passion was coaching Little League baseball. In 1965, his team made it all the way to the state finals.

“When he was coaching little league,” his sister Martha said, “he was really great with those children. When he was a mailman he was the same. And he has always been a very considerate brother.”