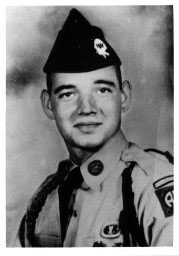 Jim Forrester was the kind of first that no one wants to be. He was the first Mercer County resident to be killed in the Vietnam War.

Sgt. Forrester had joined the army in 1962, two years before the Gulf of Tonkin Resolution that led to the deployment of U.S. ground forces into Vietnam. He had served in Turkey, the Dominican Republic, and Puerto Rico before being assigned to Company C, 1st Battalion, 3rd Brigade, 7th Cavalry.

His tour began on January 18, 1966. On January 25, just a week after he arrived, the 3rd Brigade moved with other units from its base camp to a staging area in eastern Binh Dinh Province. From there, the 7th Cav launched Operation Masher. The 3rd Brigade opened an assault that was heavily resisted by the North Vietnamese Army. On February 1st, the NVA withdrew to the north and west. Enemy losses swelled to 1,350 killed in action, rendering two battalions of the NVA’s 22nd ineffective. The U.S. Army lost only seventy-seven men, but one of those was Sgt. Forrester. While participating in a night drop from a helicopter, Sgt. Forrester was raked by machine gun fire. He died instantly from a head wound.

When news of his death arrived here, a friend told the Sharon Herald that Sgt. Forrester had had a premonition of his death. On New Year’s Eve, shortly before his deployment, he had given this friend his airborne tie tack and said, “I don’t think I am coming back.”

That was not an uncommon feeling among those assigned to Vietnam, many of whom did in fact come back. Unfortunately, for Sgt. Forrester, it proved to be true. He never came back to his wife and three children.