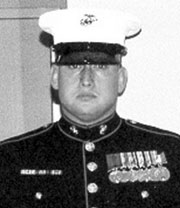 According to his mother, Shawn Graham was probably born to be a warrior.

When he was born in California where his father, Marine Sgt. Tom Graham, was stationed, Tom’s unit made Shawn an honorary Marine.

Shawn became a real Marine after graduating from Grove City High School in 1989. He could have chosen a number of career paths. He chose a warrior’s role: infantry. He served in the Marine Corps for ten years before leaving the Marine Corps to work in Texas, but the warrior in him couldn’t just quit. He joined the 124th Cavalry Regiment, 36th Infantry Division, Texas Army National Guard.

Shawn Graham was a uniquely American brand of warrior – not the archetypical rough, violent man, but a compassionate, caring man. On the web site, fallenheroesmemorial.com, many tributes describe him a very good friend, even a best friend. Sgt. Michael Almon wrote that “Sgt. Graham was a loving family man, outstanding soldier, and faithful friend. . . .”

Shawn remains an inspiration to those who came after him. One soldier wrote this:

“I currently serve in Baghdad in the same position doing the same job Shawn served in when he was killed. In our offices we have a memorial with his picture and details of his life and his service. I pass the memorial every day and think of his sacrifice and the sacrifice of his family. He is not forgotten, and his life and example will always be a reminder to us of the terrible price he and so many others have paid.”

Shawn’s compassion – and its source – is obvious from this: he wanted to send money to his mom so she could buy clothes at the Salvation Army and send them to him so he could give them to the Iraqi people. She told him to keep his money, and sent him boxes of stuff for him to distribute among the Iraqis.

“That’s the kind of person he was,” his mom said.

Obviously because that’s the kind of person she was.