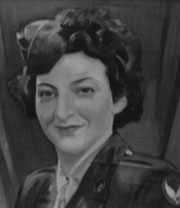 The collection of military memorabilia in the basement of the Mercer County Historical Society includes a poster of a cute young lady posing wistfully in a pseudo-military uniform. She is saying, “I wish I were a man so I could enlist!”

Fortunately, there were more than 400,000 women in the early 1940s who had more sense than that. They enlisted even though they weren’t men, and contributed to victory in countless ways.

One of them, Shirley Werner Rauch, enlisted in the U.S. Army’s Women’s Army Corps early in World War II. She learned how to fly a plane without ever flying a plane, and taught others to fly the same way had she learned. There’s no telling how many lives and planes she saved as a result.

Here’s the secret to that success: She was an instructor on the Link Flight Trainer, a simulator invented by Edwin A. Link in the early 1930s. Through a system of air bellows and electrical devices, it moved in very realistic response to the manipulation of controls like those in an airplane cockpit. A recording device on the instructor’s desk traced the “flight path” of the “plane” on a map or chart. It provided a safe and effective means of training pilots to rely entirely on instruments to fly through zero visibility and night conditions.

However, Shirley wanted to serve her country overseas. She probably would have been delighted with today’s opportunities for servicewomen. At that time, the only duty available was one that would probably have delighted the cute girl on the Historical Society’s poster: telephone operator on the old plug-in type switchboards.

The duty may not have been exciting, but the location was stellar: at the Hotel California on the Champs Elysees in Paris. It also gave her the opportunity to meet up with her father there, Lt. Col. Herbert Werner, who was in Paris working on a project for the 12th Armored Division