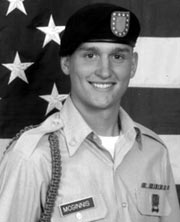 Few kids that age actually know what they want to be; Ross really, truly did. He grew up to be the ultimate army man whose self-sacrifice resulted in his receiving the highest honor the United States can bestow on its military heroes.

Ross’s career choice never wavered. On his 17th birthday, he signed up for the Delayed Enlistment Program. During the next year, he completed the requirements to qualify for entry into the army as a PFC, rather than as a buck private.

He went on duty less than a month after he graduated from Keystone High School in 2005. After training at Fort Benning, Georgia, he was assigned to the 1st Battalion, 26th Infantry Regiment, 2nd Brigade Combat Team in Schweinfurt, Germany. The unit was deployed to Kuwait, then Iraq.

There the 19-year-old kid proved himself to be a man among men. During his first three months, he participated in over 200 combat missions in and around eastern Baghdad. He didn’t just participate; he excelled. In an intense battle on November 6, 2006, he displayed such courage that his commander recommended that he be given a waiver for the time required for promotion.

He performed his final act of bravery less than a month later, on December 4. Few things take more raw courage than to ride as a .50 caliber machine gunner on a Humvee maneuvering through narrow streets during urban combat. The gunner must position himself with his upper body fully exposed to hostile fire.

On this day, an insurgent threw a fragmentation hand grenade onto the vehicle. PFC McGinnis tried to deflect it, but it fell through the hatch into the vehicle, which was manned by four other soldiers. PFC McGinnis could have leapt out of the Hummer to safety. Instead, he dropped down into the vehicle and pinned the grenade between his body and the radio mount. He was killed instantly when the grenade exploded, but the other four soldiers survived. Only one of them was seriously wounded.
For his sacrifice, PFC Ross was awarded the Medal of Honor.

Ross is the son of Romayne and Tom McGinnis. He has two sisters, Becky and Katie.