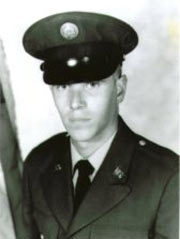 Many young men during the Vietnam War would have been delighted to fail the induction physical. Not Stephen Bednar. He tried to enlist, but failed the physical. He waited a little while, then tried again. This time he passed.

“He was very patriotic,” said his brother Martin Aubel.

He was also committed to helping other people.

“He wanted to pursue a career in the medical field,” Aubel said. “He jumped at the chance to serve in the army as a medic.”

In Vietnam, he served with A Troop, 4th Squadron, 12th Cavalry Regiment, 101st Airborne Division, from May 8, 1971 until he died on June 15, 1971. Reports from fellow soldiers revealed that he was very good medic.

“A guy who was in his squadron is writing a book,” Aubel said. “He said that Steve was an excellent medic, and a great conversationalist. Everybody liked him. When they needed a medic to go along on a mission, they always took Steve. He was out on a mission several days before he died. I believe they took some fire and there were some casualties.”

Steve, however, was not killed by the enemy. He died in the base camp from viral pneumonia.

Ironically, Steve’s father had also died from illness while serving in the armed forces. In 1951, when Steve was just a year old, he passes away from non-Hodgkin’s lymphoma.

Memories of the fallen are often laced with thoughts about what might have been. This anonymous entry appears with Steve’s profile at virtualwall.org:

“Steve was so funny! Always laughing, making us laugh. The last thing he said to me was ‘We’ll go out when I come home.’ I was so smitten! Me, an underclassman! But he never came home. We never dated. I think he never quit laughing, though. He was one of the rare few who can make the whole world seem wonderful, no matter what. It’s a sadder place without him.”

Martin Aubel remembers that Steve was not able to fulfill one of his wishes. “He sent all of his money home, Martin said, “so our mother could put it in the bank. His dream was to buy a Harley when he got home.”

Steve was the 37th Mercer County man to die during the Vietnam conflict.