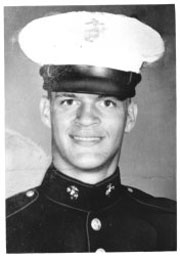 During his first Vietnam tour in 1965, Lance Cpl. Terence Edwin Klaric was severely wounded. After spending more than a year in a hospital in the United States, he volunteered to return to Vietnam. In December, 1966, he was assigned to the Combined Action Program with Headquarters Battalion of the 3rd Marine division, in Quang Tri, the northernmost province in South Vietnam.

At that time in the CAP, a Marine rifle squad and a Navy Hospital Corpsman would live in a village and work with a Popular Force platoon to provide security against the Viet Cong. The objective was to develop the Vietnamese forces to the point where they could protect the village by themselves. They also helped the villagers with humanitarian aid, such as digging wells, building schools, and the development of other humanitarian projects.

With only about a dozen men, far from any units that could provide quick support, the teams were extremely vulnerable to enemy attack. Many were overrun, often with few or no survivors.

As to Lance Corporal Klaric’s actual role in this, we know little other than the fact that he was killed on May 5, 1967, probably by an enemy grenade.

The Headquarters Battalion Command Chronology covering May 1967 covers such items as the opening of a new mess hall on May 7 for sergeants and below, with an enlisted club attached. Lance Cpl. Klaric might have enjoyed that, if he had still been alive.

The report also details the work of the Dental unit – 5365 procedures on 2304 Vietnamese patients, and the distribution of precisely 1027 toothbrushes.

Recorded for posterity is the fact that the headquarters communications center processed a total of 45,922 messages during that month of May.

Other than that fact, of course, none of the other details matters to his parents, Farrell residents Peter and Edith Parker; or to his two sisters and five brothers.

Lance Corporal Klaric was the seventh man from Mercer County and the second from Farrell to be killed in action in Vietnam.