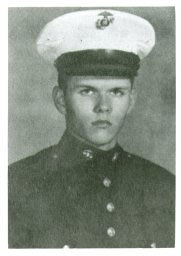 Even before graduating, Ted Dalton told his friends he wanted to be a Marine, and tried to get others to sign up with him. He managed to get one to go into the Marines with him.

Over strenuous objections from his father, Edward Dalton, he enlisted in the Marine Corps barely a month after graduating from Hickory High School in 1967. After completing training, he shipped out to Vietnam on December 14, 1967.

In August, 1967, Corporal Dalton was wounded by a grenade; he returned to duty in early August.

In letters home, he thanked his father for being tough on him when he was growing up. He wrote that he couldn’t have made it without that.

By October, 1968, Ted was an experienced Marine, having been in combat for more than ten months. Unfortunately, experience doesn’t always guarantee survival. There is always this persistent fact: in the dark of night, in the thick of the jungle, one cannot distinguish friend from foe. Safety depends on careful planning, strict discipline, and precise execution of the plan. The slightest error in any of those aspects can result in disaster.

On the evening of October 31, 1968, something went wrong in one of those elements. Two squads of the 1st Battalion, 7th Marines were positioned in the jungle to ambush enemy patrols. Their instructions were to shoot at anything that moved in front of them.

Something moved. They opened fire very effectively, killing two and mortally wounding one. Unfortunately, they weren’t enemy soldiers. They were fellow Marines.

One of those wounded was Marine Corporal Theodore Hubert Dalton from Sharpsville, PA. He was evacuated to the hospital in Da Nang.

“A friend who was there visited us later,” said brother Edward. “He said Ted was awake and in good spirits. But he was wounded in the pelvis, and the bullet lodged in his spine. If he had survived, he would have been paralyzed.”

But the hospital couldn’t save him. He died there on Friday, November 1, 1968.

“He was laid out in our home,” Edward said. “He had written that he wanted to see snow. On the day they brought him home, it snowed.”