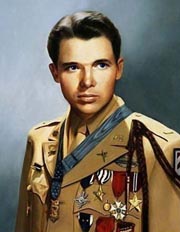 A man wrote songs during the 1960s that were recorded by Dean Martin, Jerry Wallace, Porter Waggoner, Jimmy Dean, Teresa Brewer, Roy Clark, Eddie Arnold, the Johnny Mann Singers, Dick Contino, Harry Nilsson, and many others. Nevertheless, he is virtually unknown as a songwriter.

He is known instead as the man who fought his way to hell and back, and who revisited the journey as an actor in a movie version of his autobiograhy. His name was Audie Murphy.

The most decorated American soldier during World War II, he was awarded 33 medals including the Medal of Honor, the Distinguished Service Cross, two Silver Stars, two Bronze Stars for valor, and three Purple Hearts, as well as medals from France and Belgium

His Medal of Honor citation gives a hint of his literally incredible courage:

2d Lt. Murphy commanded Company B, which was attacked by 6 tanks and waves of infantry. 2d Lt. Murphy ordered his men to withdraw to prepared positions in a woods, while he remained forward at his command post and continued to give fire directions to the artillery by telephone. Behind him, to his right, 1 of our tank destroyers received a direct hit and began to burn. Its crew withdrew to the woods. 2d Lt. Murphy continued to direct artillery fire which killed large numbers of the advancing enemy infantry. With the enemy tanks abreast of his position, 2d Lt. Murphy climbed on the burning tank destroyer, which was in danger of blowing up at any moment, and employed its .50 caliber machinegun against the enemy. He was alone and exposed to German fire from 3 sides, but his deadly fire killed dozens of Germans and caused their infantry attack to waver. The enemy tanks, losing infantry support, began to fall back. For an hour the Germans tried every available weapon to eliminate 2d Lt. Murphy, but he continued to hold his position and wiped out a squad which was trying to creep up unnoticed on his right flank. Germans reached as close as 10 yards, only to be mowed down by his fire. He received a leg wound, but ignored it and continued the single-handed fight until his ammunition was exhausted. He then made his way to his company, refused medical attention, and organized the company in a counterattack which forced the Germans to withdraw. His directing of artillery fire wiped out many of the enemy; he killed or wounded about 50. 2d Lt. Murphy’s indomitable courage and his refusal to give an inch of ground saved his company from possible encirclement and destruction, and enabled it to hold the woods which had been the enemy’s objective.

Of course a citation can’t tell the whole story. It doesn’t mention, for example, that he was just 19 years old on January 26, 1945, when he did all those things. Nor does it mention his size: he was 5’5” tall, and probably a bit heaver than the 112 pounds he weighed when he had taken his army a couple of years earlier.

But maybe not much heavier, since he had just returned to his unit from the hospital. After being wounded in on October 26, 1944, he couldn’t be evacuated for three days because of rain and mud. Gangrene developed in his wound. In the hospital, he lost part of his hip muscle while the gangrene was being cut out.

He rejoined his decimated unit on January 14, 1945. By January 26, only 18 men remained from its maximum strength of 235. Murphy, who had received a battlefield commission just three months earlier, was the only officer left. That made him the company commander.

That’s when Germans tanks and infantry attacked what they knew was a very small unit. They couldn’t have known that they would be defeated by one small soldier.

By any odds, Audie Murphy shouldn’t have survived that battle, much less earlier battles in North Africa, Italy, and France, including invasions of Sicily, Anzio, Salerno, and southern France. He did survive the war – but at great cost. For the rest of his life, he suffered severely from “battle fatigue,” known today as Post Traumatic Stress Disorder, with the worst that it entails: nightmares, drug addiction, severe and sometimes violent mood swings, etc. He was even arrested on suspicion of assault and attempt to commit murder. Fortunately, he was acquitted of those charges.

In spite of such setbacks, his innate courage enabled him to accomplish many things, including the writing of hit country songs, a movie career that included 44 films, and breeding quarterhorses. Perhaps that courage was never more tested than when he agreed to play himself in the film version of his autobiography, To Hell and Back. Who besides Murphy, after fighting his way to hell and back, would agree to revisit that horrendous journey?

Unfortunately, gambling and bad investments left him in debt by the time he died in a plane crash on May 28, 1971.

He was buried with full military honors in Arlington National Cemetery.