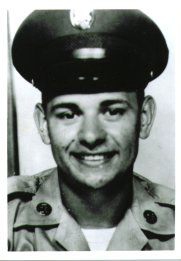 When he joined the army, William Rauber of Wheatland was following a military tradition established by his father, Drago Rauber. But Drago was never a part of the American armed forces. Born in Croatia, he served in the Croatian and British armies.

William was born in Hamburg, Germany, in 1948. He was three years old when his parents emigrated to the United States. They settled in Wheatland, so William attended Farrell High School. He enlisted in the army in March, 1967.

He arrived in Vietnam on April 2, 1968, assigned to the Headquarters Company of the 6th Battalion, 31st Infantry, 9th Infantry Division. That made him part of the Mobile Riverine Force in the Mekong Delta, probably heading into combat aboard the descriptively named Brown Water Navy.

The Mobile Riverine Force was a joint military operation between the U.S. Navy and the 9th Infantry Division. The soldiers were inserted into combat and extracted either via modified Navy vessels or helicopters. One Riverine veteran wrote that the typical tactical plan was to go up and down the rivers and canals until they were shot at. Then the Navy would blast the area with .50 caliber machine guns and other weapons, then land the infantry to pursue the enemy. It was dangerous, wet, and intense duty.

He was there barely enough time to get his feet wet. Probably a couple of weeks after arriving, he told his parents in a letter that “tomorrow we are going out for two to five days.” They received that letter the day after they were notified that he had been killed in action on April 25.

He was survived by his parents,three sisters, and two brothers.